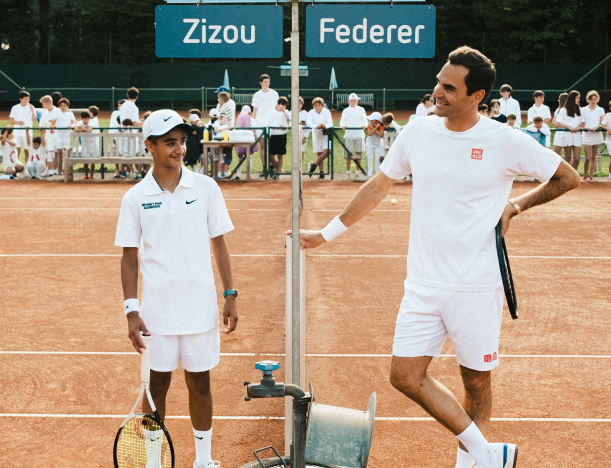 When Roger Federer makes a little promise, it’s a game changer for a young fan.

During the US Open 2017 press conference, Federer was challenged by a fan and tennis player Izyan Ahmadknown as his fans Zizou. He asked if Federer could continue playing until he was old enough to play against him when the time came.

Swiss Maestro Federer gave Zizou his word and a “little promise” and the video went viral on Youtube.

Five years later, Barilla, Federer’s longtime sponsor, kept the promise of the former world number one and gave Zizou “the best day of his life”.

Zizou was initially informed that he would be traveling to Zurich for training purposes, but little did he know that he would be meeting his tennis hero. It was not an easy task to fly Zizou all the way from USA to Zurich, Switzerland without knowing what to expect, in fact it was only with the help of Zizou’s family and his trainer that his dream became possible. There was no room for error as the aim of the film was to show an honest moment between a top athlete and an avid fan.

Check out Zizou’s charming emotional response to see his hero at around the 1:50 mark of the video below.

“We made a promise, right?” says Federer to his young fan. “We will play. Are you ready?

An emotional Zizou replies, “Oh my god, thank you, I’m so excited.”

As you can see from Zizou’s highlights, including a gorgeous tweener, he’s no ordinary fan.

Zizou is currently the No. 1 in the US for ages 12 and under in both singles and doubles. He trains at the John McEnroe Tennis Academy (JMTA) on Randall’s Island in New York City and is part of the USTA National Player Development Program. A young ambitious player with a passion for the game to follow in the future.

Here is the video of the first meeting between Federer and his young fan when Zizou asked the Swiss to play long enough so he could face him.

On this special day, Federer and Zizou come together over a friendly match and a well-deserved Barilla pasta dinner, chatting for hours about their ambitions and passion for tennis.

This isn’t the first time Federer and Barilla have teamed up to organize touching encounters with young fans.

Reminisce during the pandemic when two young Italian women inspired fans worldwide with a heartwarming video of their rooftop rally.

In July 2020, thanks to a brilliant idea from someone (Barilla? Federer himself?), Federer traveled to Liguria to surprise the videos’ bubbly protagonists as they shot a video about their exploits.

Even when he’s not actively playing on the tour, Federer continues to forge joyful connections with his fans.